Make sure to have plenty of towels as this gets messy. I use the bed instead of the table so the person holding the kitty doesn’t have to bend over. My mom used to help me syringe feed my sister’s cat Midnight occasionally, as she was older and had suspected IBD and CKD. She would get very nauseated sometimes and even appetite stimulants didn’t work. If your kitty isn’t eating on their own, you must never wait longer than 36 hours to syringe feed as it takes less than 48 hours for fatty liver to set in. Mom would sit on the side of the bed with at least 3 towels spread underneath where Midnight sits. Midnight would be placed sitting up with a towel wrapped around her front, the opening in the back and wrapped like a burrito so she couldn’t run away or lift her paws to scratch or move. You can also use a pillow case or a restraint bag; (if you have a difficult kitty you can buy a special cat restraint bag to put them in so they can’t get loose. It doesn’t hurt them and makes sure they can’t struggle or hurt themselves). The restraint bag would be helpful to anyone who’s doing this by themselves with no help. You can get them anywhere like Amazon or Entirely pets. If you are doing this alone, either sit on the bed or on the floor with kitty between your legs, someplace where both of you will be comfortable. You’ll be there for at least 15  to 20 minutes so make sure you won’t get sore. No kitty is happy to be syringe fed but if they have to be, most likely they won’t have the energy to fight too much due to being sick. But you’d be surprised at how strong some of them can be when they want out! 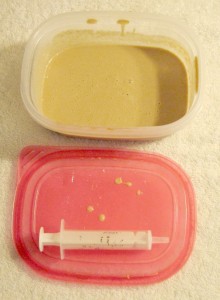 You can get a medicine syringe at any drug store or someplace like Walmart or Target stores in the pharmacy departments. I have a medium sized, 10 ml syringe that I use for syringing food but also for syringing water after pilling. If you have to give your cat any pills, take the opportunity to do it before feeding so their stomach isn’t empty when you give their medications. You can also get a syringe from the vet but do not use a large syringe as you could cause aspiration. Large syringes are mainly used when kitty has a feeding tube inserted.

Have everything you need ready before putting kitty in the towel or bag. You can get special liquid food from the vet made especially for syringe feeding if you’re able to but if you can’t, you can take any pate food and blend it. I liked to use Evo as it’s grain free, high in quality protein and low fat/low carbohydrate. Plus it’s already a very smooth pate with no chunks in it so it’s easy to blend. Take a can, put it in the blender with approximately 1/4 to 1/2 cup of water depending on the thickness of the food. You don’t want so much water that it’s mainly water when you feed it. You want just enough water so that you’ll be able to get the food in the syringe. Put the blender on liquefy if you have that button or something similar to get it smooth.

When you’re ready to feed, put your free hand around kitty’s head so you can gently lift his or her mouth open and they can’t turn their head too far to the other side. Gently and slowly syringe food into the side of the mouth. Most likely they’ll chew on the food even though it’s liquid. Don’t stick the syringe too far into the mouth or they’ll chew that as well. Take a short break after about 10 seconds or less as their mouth fills up with food. Syringe for 10, take a break, etc. You don’t want your kitty to choke or throw up. This process will take awhile so be patient. I usually did at least two syringes full to make sure she got a good amount but not enough to make her too full that she’ll throw it up. Syringing usually stimulates their appetite enough to get them to eat on their own but if within four hours they still aren’t eating, syringe feed them again. If you have to do this throughout the day, I’d say do at least four feedings; no less than that. But if you can get them to eat on their own at any point, make sure they are still eating enough calories to get them through the day. If they’re only nibbling, that’s still not enough, you’ll have to syringe again. It’s imperative they get enough food. Put the remainder of the food in the fridge and when it’s time for another feeding, take it out to let it warm to room temperature about 20 minutes before hand so it’s not cold when going down your cat’s throat.

Food is going to go flying, trust me. Kitty will do a little spitting and you’d be surprised at how easily the food goes in every direction! Wear something easy to clean or something like a T-shirt that you don’t care if it gets dirty. I take a wet paper towel or kitty wipe and wash the side of kitty’s face a bit before letting her go as she is going to also be a mess. Even though they’ll most likely groom, they’ll miss some of it and you don’t want it drying up all over their fur, it’s going to itch and hurt them after awhile. This is definitely not a clean process but it’s worth it so your pet does not get sicker than they already are. You want to speak softly and reassure them during the whole process so they aren’t frightened or think this is a bad thing.  Be sure and praise after you’re done, even if they squirmed like the dickens to get out. If your vet is unaware you are syringe feeding, be sure to call them as soon as possible to let them know what’s going on so kitty can be checked out. If your cat is still not eating after a couple of days ask your vet for an appetite stimulant like cyproheptadine or mirtazapine. It’ll help them eat on their own and won’t stress either one of you out by force feeding.