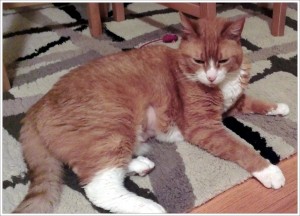 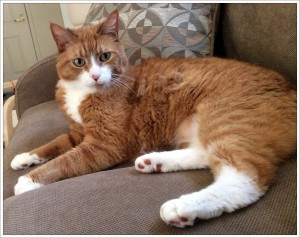 During this period, Patrick was in a foster home while figuring out illness, medication and food. The shelter reported that IBD symptoms included both vomiting and diarrhea. During this time, the shelter volunteer(s) tried to get him adopted through Facebook. As a volunteer for the shelter, as well as a follower of the Facebook page, I fell in love with Patrick. So…

June 4, 2014: I decided to visit the shelter (this is the same shelter that Cadet was adopted from), and left with Patrick that night, knowing exactly what his diagnosis was (I researched for a week or so prior) and what the course may look like going forward. At the time, he was on 5mg prednisolone pill every other day. He was eating Friskies pate fish flavors only (wet) and Science Diet sensitive stomach and skin dry. He vomited once on the 45 minute drive home and once prior to the vet appointment.

June 10, 2014: vet appointment. Everything looked good overall, although vet was concerned with a slight heart murmur, but EEG was normal. Vet recommended a switch to budesonide as it was a better steroid for GI disorders, especially IBD. Also recommended switch to novel protein foods. Vet also recommended a dental soon, but to focus on the IBD, transition of medication, and food figured out first. Prior to the medication switch, Patrick would often dry heave (once a day on average), one loose stool was noted, and two vomiting episodes.

Food was switched to Nature’s Variety Instinct (after some transitioning and trial and error of what he liked). Eventually, Patrick’s feeding schedule became rabbit dry kibble ¼ cup once per day and wet food is a rotation of lamb, rabbit, pork, duck, and venison, ¼ of a small can twice per day.

June 17, 2014: Prednisolone was stopped and budesonide was officially started. We started at 1mg suspension in 0.5ml syringe 2 x per day for 2 weeks. We then tapered to 1 x per day for 2 more weeks. Then once every other day. That is the current dose since July, 15, 2014. After the medication switch, dry heaving has been minimal. A few episodes of vomit, but often related to too many treats (I’ve since stopped giving treats most days) or hairballs.

September 2014: vomiting increased to 1-2 times a week. On advice from IBDkitties on Facebook and webpage, started giving small amount of egg yolk in wet food once per day for 3 days, then wait 4 days, then repeat, as it appeared hairball related (not IBD related). Vomiting decreased back to maybe twice a month. Budesonide was also increased to 1 time daily for 1 week, then returned back to every other day.

October – November 2014: stopped egg yolk for one week, four vomits close together occurred, so gave egg yolk again, as well as budesonide increased to 1 time daily for 1 week, then returned back to every other day. No dry heaving noted in either month.

November, 2014: stopped egg yolk and started Jarro brand acidophilus ½ capsule mixed in with wet food once per day. Since the probiotic was started, there have been no episodes of vomiting (as of December 9, 2014).

Since Patrick was adopted, there have been no episodes of diarrhea (as of December 9, 2014).

November 30, 2015: December 2014 – Patrick had an increase in vomiting episodes, but he appeared to be very nauseous. I did not want to go the prescription route and attempted some other remedies. Through research, I decided to try Cannabis through Canna Companion.

January, 2015: Started the Cannabis 1 capsule on 1/2/15. From January through March, it appeared to reduce his nausea significantly (less lip smacking, less drooling, no gurgling). Only 1-2 vomits noted each month.

March, 2015: Patrick was becoming less interested in the Nature’s Variety wet foods, no matter what I did. We switched to Sheeba “Perfect Portions” wet food after sampling a variety. He now eats half a portion in the AM and half in the PM.

March 19, 2015: Vet appointment for a check-up prior to my vacation. He weighed 11.8 pounds. He was shown to have a 1.5-2 grade heart murmur on the left side. He had a senior blood panel done, all was “immaculate”. Discussed a dental.

In March, I went away on a week vacation. Prior to the trip, I attempted to take Patrick to my dad’s (an hour and half drive). About 15 minutes shy of my dad’s house, Patrick vomited as well as had diarrhea. He had no issues on the way home as I was able to use the larger dog crate in my car on the way home. He seemed fine after this. He ended up being boarded for the week (this was not the original plan). When I came home, he definitely seemed off, but eventually came out of it. The boarder did not report any episodes of vomiting. Two episodes of vomiting (including during the trip to my dad’s) noted.

April 2015: Patrick had a dental and had 2 resorptive lesions removed. He was off for a little while after this as well (which was shortly after I returned from my vacation). During the procedure, he did not evidence the murmur, which suggested the murmur is only evident when stressed. Only 1 episode of vomiting noted.

July, 2015: Vet appointment as a follow up from the dental and to gather records for a cross country move. No heart murmur noted again. On exam, his colon appeared slightly enlarged but his liver and kidneys appeared good. X-ray showed intestinal tract with no issues, showing the IBD to be well controlled.

At the end of July, Patrick and I moved out of my apartment in NJ, stayed with my dad for a week, and then moved to Colorado. We drove across the country in 3 days, with Patrick in a dog crate with a bed, hammock, and litter tray. Considering the nature of the trip, Patrick did extremely well, with no episodes of vomiting or diarrhea at all.

In August and September, 2015, Patrick had an increase in vomiting, most likely due to the stress of the move as well as hairballs (3 in August and 4 in September). However, no other behavioral changes have been noted.

August 31, 2017: Patrick takes 2mg Budesonide Compounded suspension liquid in a 0.5ml syringe every other to every 3rd day. He takes ¼ tablet Cerenia as needed for nausea (dissolved in water and mixed into his wet food). This was added in December 2015 after a likely flare that brought him to the vet. He gets ½ capsule morning and night (1 capsule daily) of Dr. Formulas Nexbiotic probiotic mixed into his wet food. This was changed from Acidophilus only to provide more probiotic strains in the middle of 2016.

Patrick no longer takes Canna Companion. He eats ½ Sheba Perfect portions wet food AM and PM. He also gets a small amount of dry food (Nature’s Variety Instinct Duck and Rabbit mixture) overnight. When we go away, he is usually boarded at the Pet Lodge attached to the vet. He will get Budesonide nightly and cerenia every other night while we are away to hopefully reduce the impact of the stress of being boarded.

Overall, Patrick continues to be healthy. We still have episodes of vomiting about 2-3 times per month. Dry heaving is very minimal, which is great. Since December 2015, we have had no major flares of his IBD. He had a check up in June 2016 as well as in January 2017 for updated shots. He’s holding his weight steady at about 10.5 pounds (down from over 11 when I first got him, but this is more appropriate weight for him). Blood work remains within normal limits. He will have new blood work done in November/December 2017 in preparation for a dental in December/January.

In July, 2017, I was able to get a free DNA kit. I won’t have the results until late September or early October, but I’m interested to see what the results say, if anything!

November 18, 2018: Overall, Patrick is still doing well. He continues to eat Nature’s Variety instinct dry food (about 1/4 cup a day, in 2 1/8 cup automatic feedings) and Sheba Perfect Portions wet food. He continues to get Nexbiotic probiotic human grade mixed into his AM wet food. We did increase his liquid budesonide to a 3 day on 1 day off schedule for a while. Every other day was not enough, but every day would be stressful for us both and Patrick would run away when he saw me coming. The 3 day on 1 day off helped to decrease the stress. However, after a vet visit in August, we changed to a powder budesonide that is mixed into his PM wet food, and he seems to be doing very well on that, and I no longer need to chase him with a liquid syringe.

In August, Patrick was diagnosed with asthma. We talked about changing him to prednisolone to hopefully help both the IBD and the asthma, but he’s doing so well on the budesonide I do not want to change it. So we trained Patrick to allow me to hold a kitty mask to his face with an aerosol inhaled steroid. We are going to give this a try for some time, and see if we get improvement. If we need to change his steroid, we will, but for now, he is doing so well that I am not ready to make that change. Also in August, the vet declared he is medically exempt from distemper vaccine due to his autoimmune diseases and age. He will still likely need to have a rabies vaccine due to where we live even though he is indoor only, but at least we only have to give one vaccine.

I did finally get the results of the DNA kit, but nothing was really said. Patrick has some similarities to an American Shorthair, Abyssinian, and Ragdoll, as well as to the wild breeds of Clouded Leopard and Scimitar-toothed cat. I am hoping for new updates as they improve their systems for information about genetic features and health. This was done through Basepaws.com.