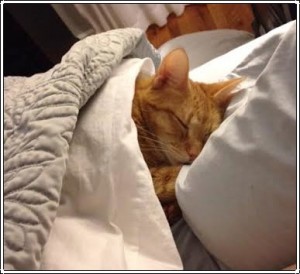 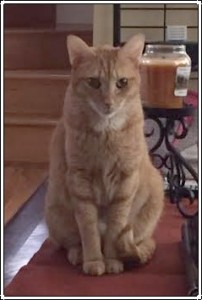 Male, Domestic Short Hair
Born in approximately May of 2006
Diagnosed with FHV in June 2007

First entry, November 29, 2014: Max is an 8 year old male who was diagnosed with FHV when he was a kitten and IBD at 8 years of age. He started vomiting a couple years ago. Sometimes he would vomit hair balls and sometimes it was either food or just liquid. There was no pattern to his vomiting. It was rather unpredictable but more often than not, it was in the early morning hours. He has always been a thin cat, but then I noticed he started getting alarmingly thin. I also noticed that his breath was horrible! I brought him to our vet and she suggested we run blood work and perform a dental. We thought maybe he had a rotting tooth or perhaps diabetes. The blood test came back perfect and his teeth were found to be in good shape as well. The vet suggested giving him some Pepcid to see if that settled his stomach. I did this twice a day. At first he was responding and we would go two weeks without a vomiting episode. However slowly it started returning with more frequency. It seemed the Pepcid was no longer working.

November of 2013: I contacted a home vet to come out to the house to give both of my cats their annual physical exam. I was looking forward to a getting a second opinion on Max. This vet told me he thought it was hairballs and I should try a hairball remedy. I decided I would follow this suggestion. However this also proved to be ineffective against Max’s vomiting. At this point I wasn’t sure what to do. I’m not sure why IBD did not occur to me. We limped along like this for several months.

August 7, 2014: I came home and found projectile vomit on my bed and saw Max in the corner of my bedroom squatting like he was trying to poop. In the 8 years I had Max, he has never gone outside his litter box and he always had perfect poop. When I ran over to him and lifted his tail, I could see he was trying to force a huge piece of poop out but it was too big to come out. I immediately raced him to the ER, afraid I was going to lose him. As soon as the ER vet put him on the exam table, he pooped it all out on his own from fear. I didn’t see it but the vet said it was voluminous like he had been constipated. They also took an x-ray to make sure that he did not have a blockage in his intestines. That’s when we saw it. The ER vet called me in to the room to show me Max’s x-ray. His intestines were huge. I was told to see a specialist ASAP.

August 12, 2014: I took Max to an Internal Medicine Specialist. She performed an ultrasound. During the ultrasound she saw that his intestines were very thick. She said a normal feline intestine should be .05” thick and Max’s was .38”. During the ultrasound I had given them the okay to try to aspirate his intestines to get a sample to test for possible lymphoma. It would be the least invasive way to see what we were dealing with. Unfortunately the sample she took could not be read because it didn’t have enough cells in it. At this point I decided not to put him through a more invasive test, which would be more costly than what I had already done and we may still not get a definitive answer. We decided to instead charge ahead and treat him for IBD. Max was put on 10mg/ml of prednisolone 1x per day, 50 mg of Flagyl 2x per day and B12 injections once a week which would taper down to once per month after several months. Almost immediately after we started him on this drug regimen, he had no more vomiting. It literally stopped. His bad breath was also completely gone. I was told to that the prednisolone could cause diabetes though so that I should bring him in for a monthly glucose test.

September 9, 2014: I brought Max into my regular vet for the glucose test and a weigh in. His blood test showed no signs of diabetes and he had gained a ½ pound! My vet said I could taper his prednisolone down to 7.5mg and if he does okay on that dose for 4-5 weeks, then we could taper it down a quarter again. Still not one incident of vomiting in 4 weeks!

October 14, 2014: I took Max in for another monthly glucose test and weigh in. Blood work showed no diabetes and he gained another ½ pound! At this point I tapered his prednisolone down to 5mg/ml. Still not one incident of vomiting since August!

November 24, 2014: I took Max to the vet for yet another glucose monitoring test and weigh in. Blood glucose test was negative for diabetes and he gained another 2 ounces. At this time, he has been tapered down to 2.5 mg/ml of prednisolone a day. At this time, Max is doing fantastic! He has not had one incident of vomiting in over 3 months. He is on 2.5 mg/ml of prednislone a day, 50mg Flagyl 2x per day and he gets B12 shots every other week. I also add in a probiotic to his food every day, Ultimate Flora 15 Billion by Renew Life.

October 7, 2015: Max is doing great and still medication free. No supplements and I only feed Wellness canned turkey and Orijen cat and kitten kibble.

September 20, 2016: Max has been doing really well. He still gets .2 ml of Prednisolone every other day and probably will for the rest of his life. He has had no negative side effects from it and is the healthiest he’s ever been. He has had no flares in over a year, if not longer. His belly hair which was shaved 2 years ago when he was first diagnosed, is finally starting to grown in again. He’s a happy cat! He only eats Wellness canned turkey and Orijen dry. I do not give him any supplements or other drugs besides the Prednisolone at this time.

August 14, 2017: I increased his daily dose of Prednisolone from 2 mg every other day to 2.5mg every day after a bad flare he had 6 months ago. My boyfriend and his two cats moved in around that time as well and I think the stress caused the flare up. I tried to get him down to every other day again but he vomits when I try. He is stable on the daily dose of 2.5mg for now. He continues to eat Wellness Turkey and Orijen dry.

October 22, 2018: Still stable on 2.5 mg of Predinisolone a day. He eats canned food (Wellness complete health or Wellness Core) twice a day and I put out dry Orijen at night only. He is doing well.

May 25, 2020: Max is still stable on 2.5mg of Prednisolone per day. He is currently eating Natures Variety Limited Ingredient Rabbit or Turkey canned and Stella and Chewy’s freeze dried raw duck. He is up to a whopping 14 pounds. He does vomit up food about once or twice a week but is generally doing really well.