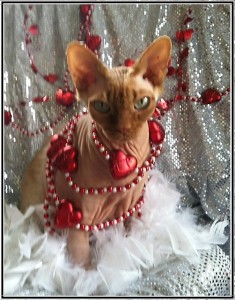 First Entry Feb. 6, 2014: Disco was born in cattery in Texas, MajikMoon and came to me when he was 7 months old. He was fed a raw diet of some form before I got him. 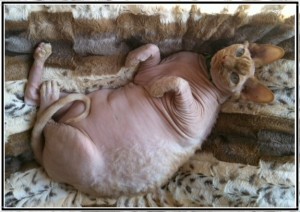 October 12, 2006: Routine testing for toxo in cattery, just by chance, included Disco in this testing. Disco tested Igg neg, Igm 1:64. Tx with clindamycin 75mg BID for 21 days. Note: he was the only positive in the house!

June 11, 2008: Fecal + for giardia antigen, began deworming cycle for all cats in house as I was breeding Cornish Rex at the time and suspected new cat brought it in and it recrudesced when she delivered kittens?

In July 2012, he began with loss of appetite and severe diarrhea. Metronidazole didn’t help at all. The regular CBC/Superchem was essentially normal. The Antech GI PCR Panel was all negative. Toxo neg/neg.

Antech GI panel (TLI PLI Cobalamin Folate). Cobalamin 339; Folate 20.4; TLI 101.7; PLI 15.7. Cobalamin low, TLI and PLI very high. Pancreatitis and infiltrative gut disease, probably IBD. He had pancreatitis, so in the beginning he was on antibiotics and gut medicines: metronidazole and marbofloxacin (antibiotics), sulfasalazine (for colitis) and buprenorphine for pain.

He also was tested for all the tick borne diseases as well (did them as he had a couple of vestibular episodes, could have been the metronidazole though) and they were all neg, as were the fecal PCR tests.

IBD confirmed with some round cells seen which can be precursors to cancer, prednisolone (not prednisone!) and Leukeran 2 mg. His blood glucose readings went way up (361 on 1 test) on the prednisolone, so we switched to budesonide as it specifically targets the intestinal tract, and he’s fine on that. Stopped metronidazole. He started out on 2mg budesonide tiny tabs, once a day for 1 month, then lowered to 1mg once a day for a month and then 1mg every other day for a month and then lowered to every 3 days which he is still on.

The leukeran he started in a cycle of 3 days on and 18 days off, and is currently taking it twice a month now. It is used in lymphoma, too but at a different dose.

The supplements he takes are psyllium powder (I use Konsyl, human type) 1/4 teaspoon twice a day and he was on Fortiflora but a holistic vet didn’t care for the animal digest in it and I switched to the brand Rx Vitamins for Pets Nutrigest. He gets 1/4 teaspoon twice a day of that. He started out after diagnosis eating Hill’s z/d canned and dry, after 2 months went to Royal Canin Rabbit/Pea as the experts say that rabbit is the least protein reactive to IBD cats. All the cats are eating the same food with the supplements mixed in (they share) so I am not sure exactly how much Disco actually gets and I could stop both the psyllium and Nutrigest but heck, they are good for any gut so I will keep them on them. He currently is eating Natures Variety Rabbit, and Duck. Note: The CANNED dog variety of it has the proper amount of Taurine for a cat and is quite a savings, so I am feeding it now.

This is a 7-year-old neutered male Sphynx cat. History: Presented 7/30/12 for diarrhea for one week unresponsive to metronidazole. Labs: Negative. Presented each less than one with hives on rear thigh,growing, lung abdomen, and axillary area. Skin stripping negative. Diarrhea still present. Has URI symptoms. Samples of the pancreas,colon, ileum, jejunum, and pylorus are submitted for examination.

Ileum: The lamina propria is mildly expanded by fibrosis, with mildly increased numbers of lymphocytes and plasma cells also noted.

Pylorus: The samples from this site are not pyloric but rather small intestinal in origin. Mildly increased numbers of lymphocytes and plasma cells are again noted in the lamina propria.

Colon: A single full-thickness biopsy is examined, which is characterized by mildly increased numbers of lymphocytes and plasma cells in the lamina propria multifocally, accompanied by mild fibrosis and occasional neutrophils.

Pancreas: All components of the endocrine and exocrine pancreas are present in the normally expected position and proportion and appear unremarkable. Small numbers of lymphocytes and plasma cells are noted multifocally in the interlobular connective tissue.

The inflammation noted within the pancreatic interstitium is mild and may not be of clinical significance.

January 1, 2014: Disco continues to do very well. Normal stool and appetite for over a year. Still obese at 14.5#. He eats 3 TBS of Nature’s Variety Duck a day and about 6 oz of Nature’s Variety Rabbit canned. He is overdue for lab work but he is symptom free. I am so glad I did the full-thickness biopsies rather than go with the pinch samples that endoscopies get, as we may have missed his diagnosis and I would think he was ‘cured’. While I know the doses of the meds he is currently on are very, very low and he may be able to be maintained on diet alone, I am fearful of lymphoma due to chronic inflammation and if what I am doing is keeping his guts calm, I will keep it up. If all the meds are doing is keeping me calm…well, that’s good too, hahameow!

January 22, 2014: Presenting complaint: Vomiting, diarrhea, may have been brought on from switching from rabbit to duck variety of Nature’s Variety food?

8/18/14: Hx of urine spray marking, increasing again, start back on paroxetine 10mg tabs, 1/4 once daily or every other day.

September 2, 1014: Dental procedure, no extractions, recovery normal. Have been dieting with just 1 Tbs of dry food twice a day and 6 oz of wet food twice a day (that he shares with 2 other cats but he eats the most. He is finally just under 14#, with a goal weight of 13#.

May 10, 2015: He just had his 6 month exam and his labs were all good, but even though he seems symptom free, his PLI was elevated at 10.6, so some pancreatitis going on there. Vet said not surprising in association with IBD and obesity. He has been stuck at around 14# since diagnosis in 2012 in spite of getting very little dry food and his target weight is 11#. She said the Natures Variety Rabbit/Pea he’s been on still has too much plant material in it. She said he is at high risk for developing Diabetes Mellitus even though he is only on budesonide twice a week. She also said his urine is way too concentrated, 1.050 considering he is on canned food, and had some struvite crystals and blood (which may have been from the cystocentesis) and may partially be a reason for him urine marking.

She noted some pododermatitis (mushy paw pads) which is a non-specific indication of chronic inflammatory disease ddx bid, other. And he was slightly hypertensive (185) so he is now on amlodipine and will recheck urine and BP in 3 weeks. Because I am not quite ready to do raw, even a prepared formula, we are switching him to Weruva Paw Lickin Chicken and NO dry at all. If his gut situation remains in control for a few weeks, then we are going to start weaning the IBD meds (currently budesonide twice a week and leukeran every 2 weeks).

October 1, 2016: Disco is doing great. He’s completely weaned off all meds except B12 25u once a month, and currently is eating only Darwin’s Raw (chicken, turkey, duck) and Balanced Blend Raw (chicken) with the only treat being freezes dried bonita flakes. I began weaning him off meds in November 2015 (he had been on very low doses anyway, budesonide 1 mg twice a week and leukeran 2mg every 2 weeks and B12 .25ml twice a month). Currently he is just getting B12 25u once a month). He had been off all dry food since May 2015 (was feeding primarily Weruva Paw Lickin’ Chicken but he still was getting too many calories by cleaning up the other cats plates, so he still wasn’t losing weight! I began feeding raw around January 2016, still not losing weight, so now he eats alone and I don’t let him out of the bathroom til the others are finished! I finally have him down to 14lbs 8 oz again (he got up to 15lbs 8 oz at one point this year!).

His lab work results (he gets twice a year senior exam and labs) in Nov 2015 pertinent results were urine specific gravity 1.041 and the fPL was high at 13 (for some reason we didn’t do the cobalamin and folate!) and in May 2016 all was very good: urine specific gravity 1.023, fPL 7.4ug/L still high but improved over his last couple of readings, cobalamin 1,151 ng/L, folate 14.7 ug/L. I am glad he is doing so well off meds and on raw and now my goal is to get him down to 12lbs, so we’ll see what his next update shows!

October 5, 2018: Disco continues to do well, but had a couple of days of lethargy and poor appetite and so did labs and full exam as it was time for his 6 month senior exam/lab work anyway. We gave SC fluids and Cerenia. The pododermatitis noted in 2015/2016 has resolved.

He is on the same food as last update 2 years ago (Darwin’s Raw Chicken and Turkey) with dried bonita flakes daily as a treat, with occasional Fancy Feast as a treat. I do notice if he gets more frequent canned food, he will have soft stool and cramping on defecation, so I keep it to a minimum.

He was weaned off of budesonide about 2 years ago
He continues to get B12 25u SC every 2 weeks. We went back to twice a month as at once a month, he was a little lower than the 1000pg/ml the IMed specialists recommend.

He has been on clomipramine 2.5mg once daily for urine spray marking since 2016, and because of right hip dysplasia and mild bilateral elbow arthritis is on gabapentin 10mg once daily and Rx Vitamins for Pets Megaflex (glucosamine chondroitin/MSM powder) in food twice a day and is on Revolution once a month.

I am going to retire next year, and will repeat his abdominal ultrasound at his next 6 month senior exam just to evaluate intestinal thickness as he hasn’t had one since the brief one prior to his exploratory and biopsies in 2012!

I am glad to report he is doing so well 6 years after his diagnosis with lymphocytic-plasmacytic IBD.